Hi people, I am going to purchase a videocam for my ST ecosystem, but since we have main used Sharptools to handle it, which cam do you recommend ? Im balanced to Smartthings Cam because I think Its more reliable because same brand but open to know about some other options not as Ring high end brand, most practical, I would like see on line, two ways communication and set it as security device (motion could trigger alarm, start video). Im not interested have more than 24 hours of storage.

One important issue: How does it is displayed in SHARPTOOLS BOARD ? Does it display an updated frame (b.e each 5 minutes?) can I view it ON-Line in SharpTools Board ?..etc

How does it is displayed in SHARPTOOLS BOARD ? Does it display an updated frame (b.e each 5 minutes?) can I view it ON-Line in SharpTools Board ?..etc

See the help article for the summary of adding camera stream to the dashboard, and the short answer is yes, you can stream real-time video to the dashboard, but the video must be in MJPEG format, as that is what supported in web browsers. Blue Iris and TinyCam are common options for users to proxy the video stream (camera -> Blue Iris/TinyCam -> dashboard), because either one can encode the video into MJPEG format.

How do I add video / images to a SharpTools dashboard?

I believe there are a couple community developed device handlers allowing camera motion to work like a motion sensor, but I haven’t tried it personally. I have my Blue Iris recording all my cameras 24/7, but I do get some false motion alarms due to bugs/spiders and cars’ light. So if you really want to use the video motion as a trigger to change alarm settings, you’d probably want to consider those situations.

Hi my friend @James for your quick response, I will search and check the help article you are talking about, I hope you help me with 3 questions:

Considering what are you talking about motion detection, I think motion detection could be not as an alarm trigger but as a “light warning” just to see everything its ok,

3.- If I go for Smartthings Cam, how does it work in Sharptools Dashboards ?

I don’t know if it has MJPEG support, but I believe @prjct92eh2 indicated that they have RTSP support. So it could be used with something like TinyCam or Blue Iris to translate the stream into MJPEG.

1.- Tiny Cam can be displayed in Sharptools Dashboard, but this cam could be add to Smartthings ?
2.- Does Tiny Cam needs a hub or simple WiFi?

TinyCam is an app that runs on Android devices and can translate the streams from a camera into another supported format. (It’s also commonly just used as an app for viewing various cameras from different manufacturers in a single app). It can run on a Android Tablet, Phone, or Android TV box. Some people start by just playing with it on an old phone and then upgrade to having a dedicated Android TV box like a NVIDIA Shield to run their TinyCam ‘server’.

I don’t believe there is a TinyCam integration for SmartThings, though in theory it’s possible with their webhooks.

There is a community developed Blue Iris integration for SmartThings and it does expose events to SmartThings. The current integration is written in Groovy though, so the future for it is a bit uncertain. When SmartThings shuts down Groovy, the developer would need to update it to work with the new SmartThings platform APIs.

The video below from @Justin_Newbury should help you understand how to TinyCam can be setup as the middleman/proxy to stream the camera video to the dashboard(s). 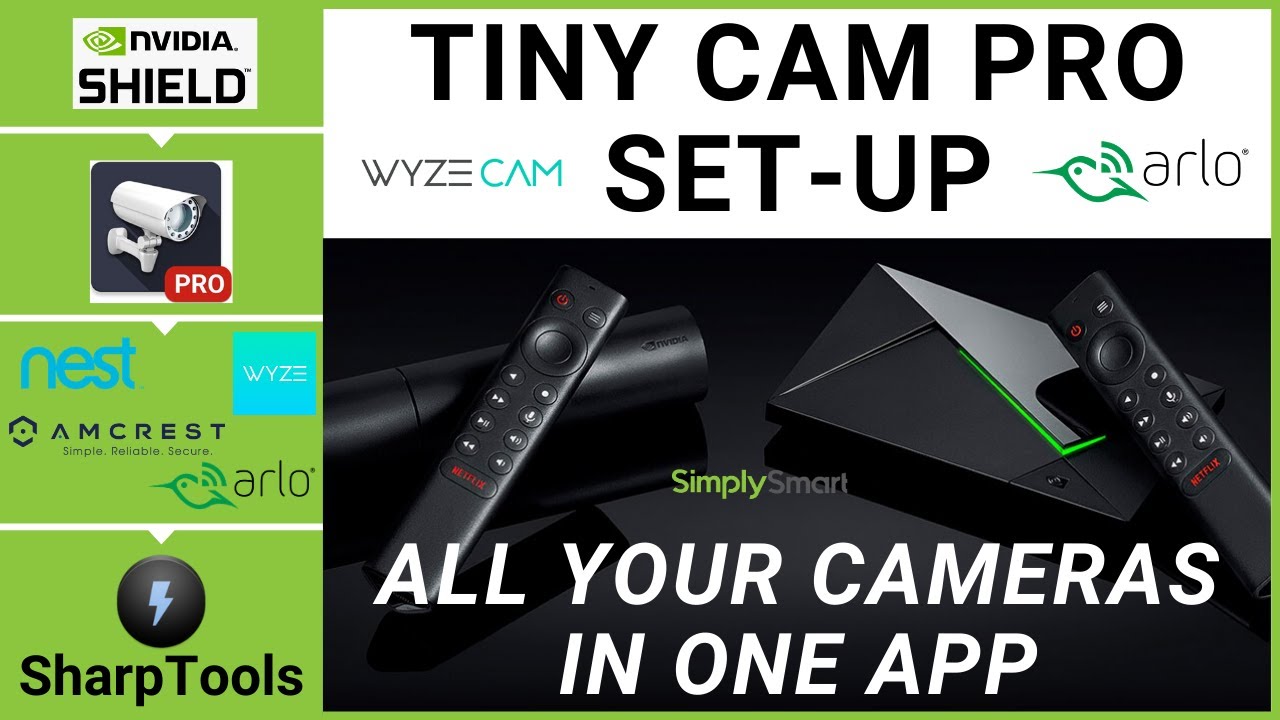 Yeah, thanks my friend I get it better. So I think Smartthings Cam most probably is for be accessed exclusively by Smartthings App or maybe a little complex to convert it to the right format (if this is true its not my best option since all family are using Sharptools Dashboards), I will look for more info about it.

In the other hand is there a Camera that could be straight connected and has a directly URL with mpeg format to access walking around the Tiny Camera App ? Any recommendation ? Thanks a lot !

Thanks my friend, now I understand Camera->Tiny Cam App (mpeg format)->Dashboard …! so if Tiny Cam App does not support Smartthings Cam, then I think its not the best option because practically all family is using Sharptools dashboards … is there a nice Camera with URL straight forward to avoid TinyCam App? Thanks again

Unfortunately, most of the cameras or NVRs don’t have a very detailed spec document. MJPEG support is usually not mentioned in the spec doc even if it is supported, and that makes the research hard.

I remember some Amcrest and Hikvision cameras supported MJPEG, but not any more after a certain firmware update. So I couldn’t recommend a camera/NVR that well supports MJPEG, but hope others can comment whatever the cameras work for them without TinyCam/Blue Iris.

Great my friend !!, now the way is more clear for me, best way is look for a couple of WiFi Cameras and connect them to TinyCam App, Im going to look as Josh recommend for an old or cheap Android mobile to convert it as stationary “cameras server” and then get the proper URL to integrate it into our dashboards …

Thanks Josh, I purchased a Wyze Cam v3 to integrate it to TinyCam Pro then to SharpTools dashboards, my question is if you know if the TinyCam app has to stay open in the Android device to link the camera with mpeg URL, or I can just use the device to check the web server to enter it to Sharptools. Thinking if I need get an old or cheap Android just for it or I can setup all stuff in one of my daughters Androids and then she can close the app but web view still available and mpeg url working …?