Why must I tell SharpTools when I’m done changing the brightness level of a dimmer?

In the physical world when I adjust a dimmer, I adjust it and I walk away. When I come back (e.g. to turn the light off 10 minutes or five hours later) it does not say:

“I’m sorry, Dave, I can’t do that. You’re still adjusting the brightness”

When I go to look at my kiosk on the wall (Fully Kiosk Fire HD), when I’m done and walk away, one or two minutes later it goes off. It assumes I’m done.

But it seems that in ST, when I adjust a dimmer, and walk away, and come back 6 hours later, ST assumes I am still wishing to change that same dimmer. Maybe it’s me. Maybe I’ve had too much coffee today (wink) but that seems bananapants. (Otherwise I mostly love ST, coffee notwithstanding.)

@Scott_Farnsworth, do you mean the dimmer dialog should be closed after a certain period of inactivity?

Correct. Is that happening and I’m just not being patient enough?

I’m not home so I can’t test it but my recall from many interactions is that:
I set the brightness (or dimness) level I want. It’s set. I’m happy. I forget to hit the ‘dismiss’ or whatever the “I’m done” label is. I come back an hour later, and ST seems to still be expecting me to want to change the brightness of that device, which invariably isn’t what I’m now wishing to do w my ST UI.

OK, am home now. I asked my Kiosk to dim the hall ceiling lights. I adjusted them. I then intentionally didn’t close the dialog box (as a test). An hour later I came back and it was still waiting for me to complete the conversation. I’m pretty sure if I left it til tomorrow the result would be the same.

I couldn’t tell if it was being like a dog with a ball in its mouth saying “You hinted three hours ago we’d play fetch, when are we going to do it??” or if it’s Glenn Close from Fatal Attraction saying “I WILL NOT BE IGNORED!”

If I want to turn a light off or on I just click a button. I don’t click a button and then click something that says “I’m done putting this light in the off/on state I wanted”.

Not the end of the world but it’d be a lot cooler if it didn’t force you to close the dialog (once you’ve accomplished what you wanted to accomplish).

[between you and Josh I think of seeing people in military service uniform at the airport where you say “Thank you for your service”. I feel I should thank you guys for all of the hard work you put into this great tool.] 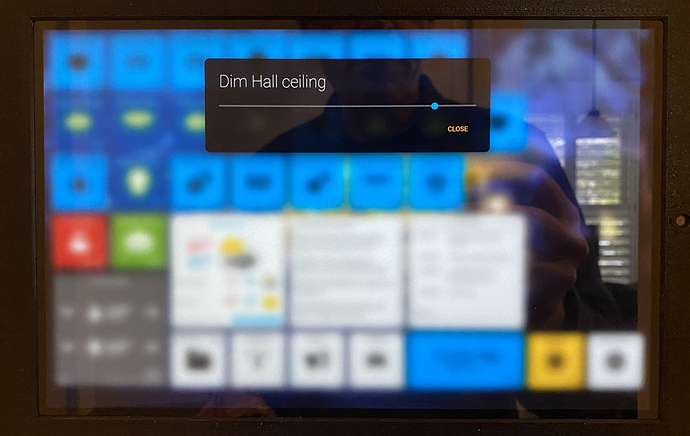 Thanks! I don’t think we’ve ever added auto-close logic to the dimmer since some people end up making multiple adjustments at a time. But I think we could add a time-out to it so it would automatically hide if it hadn’t been touched for a while.

Compare that to the Mode or Safety Monitor picker tiles where the modal is automatically closed when you select a new mode.

Ah, yes, for sure you don’t want to “auto close on select”. That would not be well received. Agree.

But after 60 seconds or 120 seconds without touching the brightness bar? Highly unlikely they’re still trying to figure out exactly what % they want their brightness at.

If you auto-close at (say) 120 seconds those users who are well disciplined and always close their dialog boxes will never know and not care.

Those of us to get things where we want them and walk away (“Ah… that’s the perfect brightness level…”) and walk away… they’ll be (unknowingly) happy when they come back later for something else and they’re already back on the dashboard.

Thanks for the thoughts and consideration!