I am new here and just finding my feet with the platform. Moving over from WebCore. I have a contact sensor and its great that i can set it up to alert if the sensor has been open for x minutes. this is exactly what i want.

But what i want to do is have the notification via Alexa. Something like sensor abc is open. I have been doing this with WebCore etc. I have seen screen shots where people have selected Alex
as the Action Device but i dont see any of my Alexa devices. Am i doing something wrong?

@Craig_McFarlane welcome to the community. You can use the HTTP Action feature in the rule engine to call Voice Monkey service, an Alexa skill, for sending notification, Text-To-Speech or even mp3 file in the rule. See the video below @Justin_Newbury has put together for a quick guide, and feel free to let me know should you have any questions.

Hello. Thank you for the reply. I will check this out and let you know. I really appreciate the reply.

I have just set this up. Great video and super easy to get working once you know. I did like Web Core but think ive found a new home and this platform looks pretty good.

Cool, glad to hear that you got it working and liked SharpTools.

James, how will the Alexa handoff be handled with your HA integration?

I’m an HA advocate, I use Alexa media player plugin on HA for control and TTS on Alexa devices.

I use Alexa media player plugin on HA for control and TTS on Alexa devices.

Is it this integration? 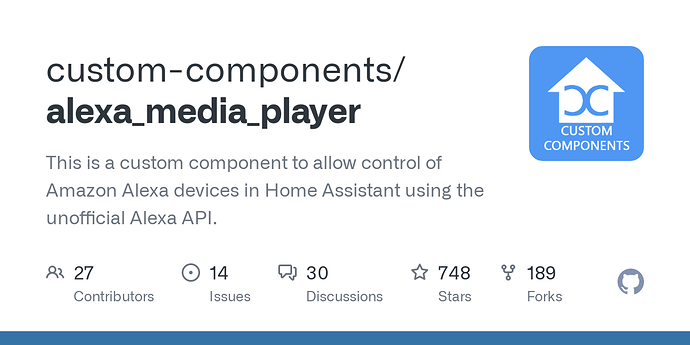 GitHub - custom-components/alexa_media_player: This is a custom component to...

I’ll defer to @James – I vaguely recall him saying that certain Home Assistant devices implemented the Media Player entity definition slightly differently than others, so the SharpTools - Home Assistant beta will probably be the best place to try it out!

@Alan_Izat , Alexa Media Player entity will be supported in the coming Home Assistant connection release(s), and this means you will be able to control Alexa devices, like play, pause, next, volume and etc, in the SharpTools Media Playback Tile as you would expect, including the media image (album art). The TTS (and video/image) features can be done via the Rule HTTP action and Voice Monkey as mentioned earlier in this post. (Combing the Rule Variables and Variable Tiles in the dashboard, this can be a flexible and powerful tool.)

Media Player entity in Home Assistant is one of those entities that are not well defined at this moment, but it seems the implementation (attributes and services for example) of Alexa Media Player is similar to the Sonos media player, so I expect both to be supported. As @josh mentioned, don’t forget to watch the HA thread for the updates.