3 Axis Sensor in a routine

Hello,
Does any one know how I can incorporate a SmartThings MultiSensor’s 3 Axis parameter into a SharpTools routine?
The tooltip suggests {foo: bar}. As a test i just tried to see if setting it to "changes and is not” 0, but this did not trigger…

Hi @Ryan_Carmichael can you clarify what you’re trying to do? Why access the X,Y,Z data rather than treating the sensor like a tilt sensor or motion sensor?

Hi @josh
I could use tilt, but the Multisensor doesn’t appear to have that option:

I could use tilt

Are you trying distinguish 90 degree positions? Like a garage door open or closed? I believe the “tilt” you are looking for is “Contact”. It should report open and closed.

Thanks for your reply @Bry but unfortunately not. With the Multipurpose Sensor, the contact attribute refers to the Hall Effect sensor. 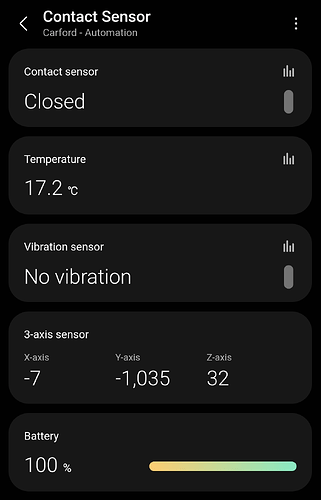 If you’re not using the Hall Effect Sensor and we are talking about the SmartThings multi-purpose sensor, you can change a setting so SmartThings treats the device like it’s on a garage door and the position of the main sensor (three axis) changes the contact state instead (the magnetic sensor effectively doesn’t do anything at that point).

For the record, my goal is to use the sensor to detect when mail enters a Mailbox.
I’ve been using the contact function which works well when the flap is opened considerably, but if it is pushed only slightly to allow a thin pamphlet to slide in it does not trigger as the magnet is still in range.
I’ve tried with the vibration sensor but got too many false positives, which was probably wind.
So I’m now trying to see when there is a tilt change which would indicate the flap opening.
I also tried a ZigBee motion sensor which works well but it would not stay connected in the mailbox (which is strange since contact sensors do)…
If you know how I can get the motion sensor to stay connected, the tilt sensor to register in SharpTools, or another idea, I’d greatly appreciate it.

I don’t have one of those sensors, but I’m wondering if a different driver might help. Not sure which one you are using, but Mariano’s reportedly exposes the axis thing.

How do I use the xyz axis features of the multiporose sensor?

im just getting started with the smartthings home montitoring kit. Ver 2 ive got everthing connected but i cant make sense of how to tap into the xyz feature of the sensor how do i use it? for example, lets say i want ot mount it on my garage door...

Thank you @Bry , I’ll give that driver a try.
And I just noticed that if it is in “Garage Mode” the Hall sensor stops functioning and the tilt takes over the contact attribute.
Still, it’s strange that SmartThings & SharpTools can see this sensor, but not use it in routines…