I have been using the Sharp dashboard for couple of months without any problems. Recently I noticed that tiles are not refreshing their states anymore. That is the case for multiple types of devices - lights, motion sensors/temperature values.
I am using Smartthings as a hub - if I change a state via the dashboard on a device, the device responds as it should. If the state is changed in Smarttthings (such as a turned lightbulb) the change is not reflected in the dashboard.
Secondly, dynamic states such as motion/temperature values are not reflect on the dashboard, despite they are in the Smartthings app.

I have re-authorized the smarrthings connections via the settings few times as well change the event server (legacy/next genration) with no change.

Thank you for letting me know what am I missing!

Are you familiar with the SmartThings IDE? Login and check if the SharpTools app is paused.

@Empire_Home, as @Chris_C mentioned, you can go to the SmartThings IDE site, click on your location(hub) and “List SmartApps”, and check the SharpTools smartapp’s status there. If the app is already running, try click the pause button and restart it again just in case. 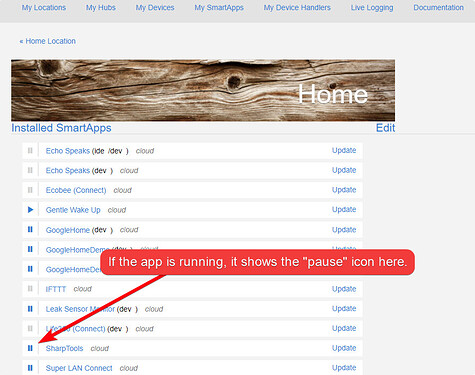 Chris, James! Thank you gentlemen! What a simple fix…if you know where to look.

Have a good day guys! Keep on automating

I’m having the same issue my devices aren’t refreshing either and I’ve checked the pause button and it looks fine as per your picture it has a Blue Pause icon.

Mine don’t refresh a couple times a week. Usually I can get them synced by going through ST app and reauthorizing.
That didn’t work today.
I went into SharpTools and reauthorized ST which synced the status but removed some devices. I then went into ST and reuthorized the missing devices from the Additional devices section. Usually this works but the additional devices are not authorizing.

When that happens, are you still able to control the devices from SharpTools (it’s just status updates that aren’t working on the legacy connection)? If you watch the SmartThings IDE Live Logs while you control the devices, are there any clues there?

@josh It seems that it is only some devices that aren’t working. Perhaps the issue is with the fact that I’m using an Edge driver ?

It’s a thermostat that I’m trying to control When I use the set temperature up or down on Sharptools it sends the message back to SmartThings. But when I change it in SmartThings it isn’t being picked up by Sharptools.

And yes. I’ve most of my devices on Edge, so I’d like to Try then Beta next-gen connection see if it sorts the issues.

Perhaps the issue is with the fact that I’m using an Edge driver ?

Yes, it’s possible. And with Groovy shutting down soon, I would definitely want to get moved over to the next-gen connection to verify.

I sent you a PM with an invite to the beta.

When that happens, are you still able to control the devices from SharpTools